A Brisbane blogger’s unique take on the new 640G

From Lewis AKA Ashleigh, a Brisbane blogger. Let's start this post off with something amusing. A few days ago my 3-hour CGM trace totally looked like a cat. Excuse the bad BGL. Apparently my supposed carb-free meal that I bolused 2 units for is not all that carb free. Moving onto the important stuff. Yesterday, a 4 year-old boy from Perth received the first MiniMed® 640G pump. I had the opportunity to play with one of the pumps last week, so I thought it only fitting that I should wake myself up enough to ramble about the new pump, and how in love I am.

And how super jealous I am of that 4 year-old kid. This is just a first impression based on an hour of asking my rep loads of questions; but I'm preeeeeety sure if I was one of those people who married mundane random objects, then I would be saying my vows to the 640G pump come May instead of my fiancé. If you're reading this my dashing H2B, sorry darling. Girls just like men who save their lives. And my pump does it more than you do.

Aesthetically, if you're a boy, you're gonna love it. If an insulin pump could have muscles, this one could have rivaled Arnold Schwarzenegger at his peak. It looks strong and sturdy, and ready to do some life-saving business. I will definitely be upgrading to the pink model (the 640G comes in pink, blue, opalescent white, black and purple) come upgrade time, because I am a girl.... and I like my pumps to look pretty. All the pumps have a black base, with a coloured front. You can choose to stick the colour onto the back as well or leave it plain. Personally, I hope they release decals or gel cases for it as with the previous models of pump. Sizewise this baby is only a few mm more than the previous models, probably to help with all that new waterproofing! 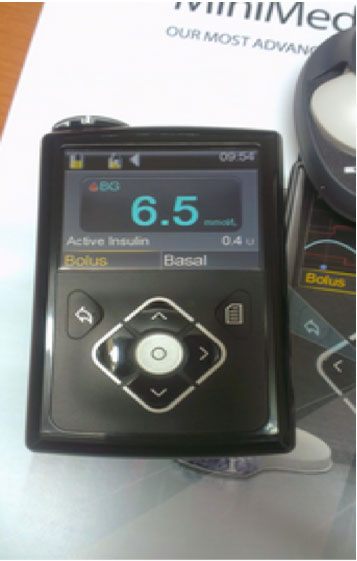 Now here's the fun part - all the exciting features that I am still trying to wrap my head around. As always with me, let's do a list! 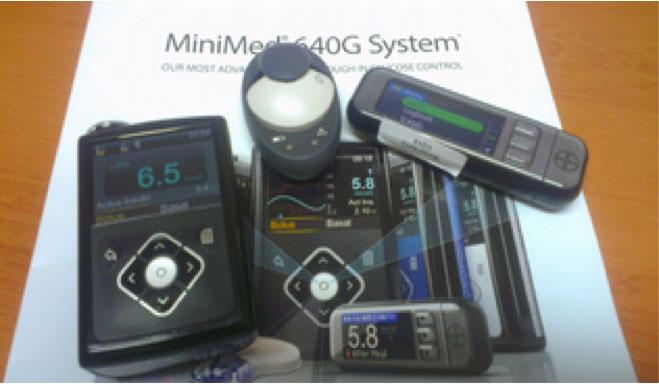 The new 640G, sensor and meter in real life compared to the brochure

There's probably a bunch more stuff that I didn't get to see. Which brings us to the CGM. New SmartGuard® technology. I know they would have done some trials and if I did a Google search I would probably find some statistics to throw at you about how well it really works and all that jazz. But honestly, I'm diabetic, I deal with enough numbers already, I don't want to look at statistics. I just want to look at what it does. Which is to try to stop hypos, before they happen.

SmartGuard® has predictive low glucose suspend. Basically it will try to head off the big bad hypo bear before it even attacks by suspending insulin delivery before you get hypo to keep you in a hypobear-free territory. Once your glucose is stable or rising again, the insulin pump will resume insulin delivery so you don't get high as a kite either.

It is a good point to note that the transmitter is different - it has a G written on it (and probably is more advanced too) - so you cannot carry over your old transmitter to use with the new system. However I have always gotten my transmitters on great deals, so I wouldn't be surprised if they offered you a deal on sensor start to help with set-up costs.

I should probably leave it there for now and let you all revel in the fact that technology is one step closer to the closed-loop/artificial pancreas system.

Disclaimer: Medtronic did not ask me to review or write about the new pump. I just like new technology and wouldn't have left them alone until they let me see the new technology for myself!